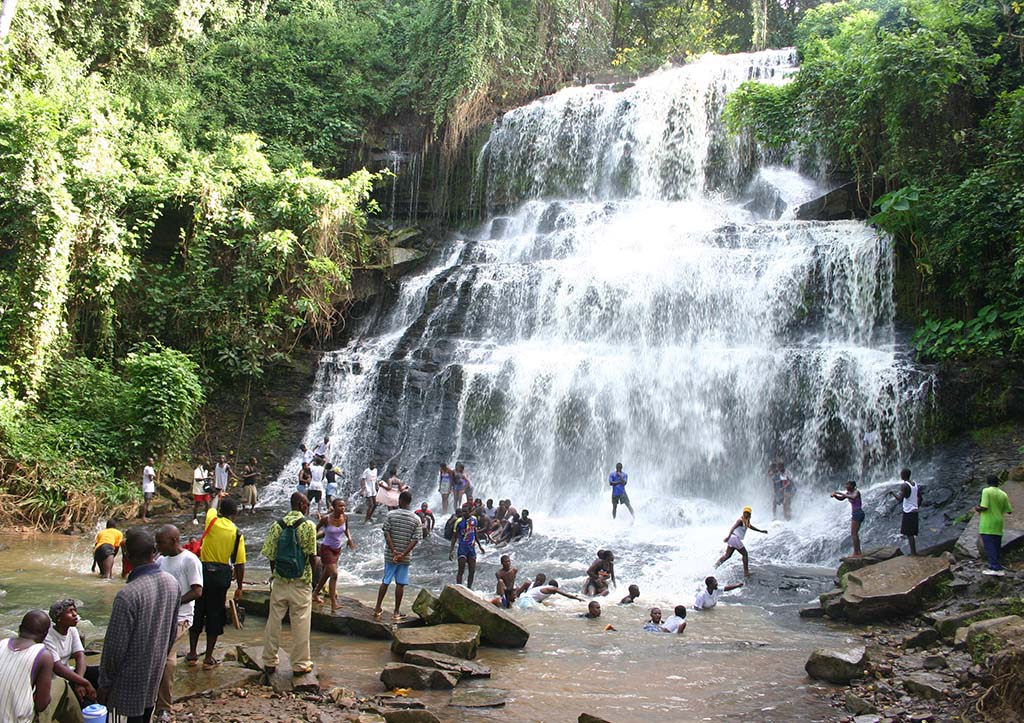 Blog Extra, History of the Library, Newspapers, Portfolio
Posted on June 22, 2020 by essel

The Boti Falls is located just 17km North-east of Koforidua, the eastern regional capital. For those interested in how soon it takes to get there, it is just over 30 minutes’ drive from Koforidua and over 90 minutes from Accra depending on your means of transportation.
River Pawnpawn which forms the falls takes it source from Ahenkwa-Amalakpo before falling over an igneous rock outcrop at the Boti Langmase that is how the falls get its name. The fall was hidden in the forest until it was discovered by a white catholic priest. It is recounted by locals that the priest used the base of the falls as an entertainment ground for his friends and himself.

The land on which the falls is located is not without any controversy though. The Akyems of Tafo who were the original owners of the forest/land wanted it back. But it was realized later that the Tafohene had sold that piece of land to one Tetteh Nguo, a Krobo. It took a court settlement to bring the dispute to a closure.
If the dispute brought Boti Falls into the public domain then a visit of the president of Ghana at the time (Dr. Kwame Nkrumah) propelled it into its status as the most attractive and talked about falls in the eastern region of Ghana. The president visited the falls in 1961 and was amazed at the splendor and grandeur of the falls. He, therefore, tasked the regional commissioner to construct a rest house at the falls.

Features of Boti Falls
There are actually two falls at Boti: The upper falls and the lower falls. These are the main features of the Boti Falls (what has widely been talked about is the lower falls). The locals describe it as male and female (this description is for the lower falls only). When the volume of water is high especially during the rainy season, the two meet in what the locals describe as ‘a mating ceremony’. This ceremony is ‘graced’ by the rainbow that is formed by the splashing water.

To get to this beautiful ‘mating’ ceremony, visitors will have to descend over 70 steps. The steps offer a timely exercise for people who have not had an exercise in a long time and the plunge pool formed at the base of the falls should provide a refreshing cooling down effect for those who want to take a bath.

Two attractions that are also available for visitors to see but not directly related to the falls are the umbrella rock and the three –head- palm tree.
The locals have managed to develop these sites to enhance the visitor experience, which means that you are not limited only to the falls but other notable attractions as well. The umbrella rock is just 30 minutes walk from the falls. The three head palm tree is unique and can be described as the ‘Siemens’ of the plant life. For those who want a guided tour of the forest reserve around the falls, tour guides are available to provide guided tours. The woods also provide a sacred place for those who want to set aside some time to reflect.
Something that is becoming a Ghanaian past-time is picnicking and under the new management of the falls, summer huts have been provided for picnic lovers. Therefore those intending to spend their holidays and anniversaries at the falls should not have any fears. If you happen to be at the falls and failed to carry any food on you, there are local food vendors at the falls. This could be a perfect opportunity for foreign tourists to taste and try some local dishes and fruits as well.

Books, History of the Library