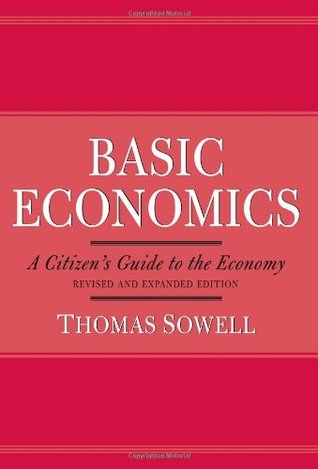 Thomas Sowell is an American economist, social commentator, and author of dozens of books. He often writes from an economical laissez-faire perspective. He is currently a senior fellow of the Hoover Institution at Stanford University. In 1990, he won the Francis Boyer Award, presented by the American Enterprise Institute. In 2002 he was awarded the National Humanities Medal for prolific scholars …more

Basic Economics is a citizen’s guide to economics-for those who want to understand how the economy works but have no interest in jargon or equations. Sowell reveals the general principles behind any kind of economy-capitalist, socialist, feudal, and so on. In readable language, he shows how to critique economic policies in terms of the incentives they create, rather than the goals they proclaim. With clear explanations of the entire field, from rent control and the rise and fall of businesses to the international balance of payments, this is the first book for anyone who wishes to understand how the economy functions. (less)

Original Title – Basic Economics: A Citizen’s Guide to the Economy

The Novel 100: A Ranking Of The Greatest Novels Of All Time